There is a lawyer cliché to never ask a question that you do not know the answer to. 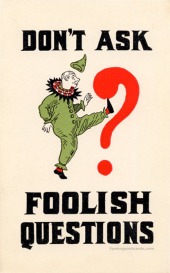 Asking that question may get you a self-serving answer that you did not anticipate.It may open Pandora’s box of bad evidence and a tidal wave of otherwise inadmissible evidence. All because you asked a question you should not have asked.

In a custody case, the opposing counsel called the child to testify. This was a dispute between mom and dad and the other attorney wanted the child to testify about what she wanted, specifically where and with whom she wanted to live. However, opposing counsel did NOT know what the child was going to say, but instead assumed it would be favorable to his client. After the routine introductory questions, the child was specifically asked,”If you had a magic wand and you could wave it and live wherever you wanted, where would that be?” After a few seconds of silence the child responded, “ A castle!” Fatal to the case? No. But not the answer the lawyer was looking for and it further helped prove positions that we had taken throughout the case regarding the child’s emotional maturity, an issue we believed worked in our favor.

Of course, sometimes it’s a critical issue and you have to ask the question. Tread carefully.

Another question not ask; When are you due?

Matthew Thompon is a Child Custody attoreny in Mississippi and tries not to ask questions that he does not know the answer to.