The Mississippi Supreme Court has reversed a Lowndes County Chancery Court Judge’s Order which essentially banned firearms from all areas of the courthouse.

This is somewhat controversially in light of several recent MS law clarifications on where one could and could not carry a firearm. A resident of the local community challenged the Court Order, alleging it contradicted state statutory law which limited broader restrictions to the wisdom of the legislature.

The law currently provides that if you have a concealed carry license and enhanced carry license endorsement you may carry in most public places, including Courthouses, so long as it is not in the Courtroom while Court is in session.

The Family law judges thought that did not go far enough and entered an Order, declaring the entire Courthouse a Courtroom, effectively banning firearms from the entire building.

The challenge was successful in having the Judge’s Order reversed. The Mississippi Supreme Court declared the Order an unconstitutional infringement on the rights of citizens to keep and bear arms.

“One of the clearest delegations of legislative power in our Constitution is found in
Article 3, Section 12. It provides: “The right of every citizen to keep and bear arms in
defense of his home, person, or property, or in aid of the civil power when thereto legally summoned, shall not be called in question, but the Legislature may regulate or forbid carrying concealed weapons.” (Emphasis in original.) Without equivocation, the Legislature is the branch of government that the citizens of Mississippi chose to regulate or forbid concealed weapons.”

The Lowndes County Chancellors have filed for a Rehearing and made several compelling arguments on why the Mississippi Supreme Court may have gotten this one wrong. Stay tuned for more.

Also, you may be wondering why the title says Don’t take your Gun to the Courthouse, even though the Supreme Court says you can, well, it’s just good advice.

Matthew Thompson is a Family Law attorney, gun enthusiast and practices in Lowndes Chancery Court and does not think family law litigants having guns at all times is a great idea. 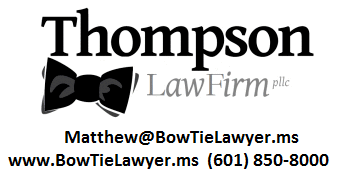 One thought on “Don’t take your Gun to Court.”