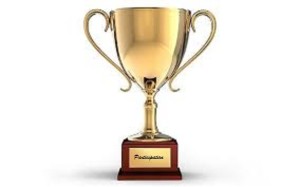 I hear and read a lot about the downfall of society. I see it too, sometimes.

But what I hear often is the wailing about the travesty of Participation Trophies. Parents, in a huff, saying that the idea of getting an award just for showing up promotes weakness, unreasonable expectations and an attitude of undeserved reward.

These same parents say that when they were a kid that they earned the trophies they received or they didn’t get one…along with walking to school uphill, both ways in the snow. That getting a trophy for “nothing” means the child will still be living at home when they are 30, in mom’s basement playing video games and eating chips.

But guess what? These same parents are buying the Participation Trophies. I have never seen an 8-year old call Mars & Steele and place an order for 16, plasti-chromed figurines atop a pedestal, requesting that each be engraved with “Go Tigers! 2017”

Participation Trophies are not the downfall of society. They are a side-effect from either the parent not receiving a trophy when they were that age or from the parent that did receive one that is trying to prevent their child from experiencing the feeling you get when you don’t get a trophy.

Teaching your child to be a hard worker, to be strong and to earn what you work for is YOUR job as a parent. It is not the job of the Coach for the 8-year old soccer team. His job is to teach fundamentals, have fun and make sure the snack list is circulated and the parents sign up!

Matthew Thompson is a former 8-year old soccer coach and while his team may not have won every game, they had the best snacks!